Urban Shots Crossroads- My Debut as an Author! 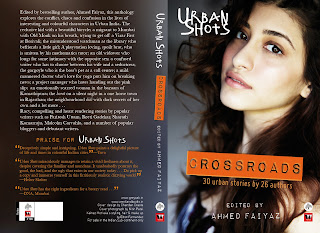 A couple of months after my return from Canada I attended the Jaipur Literary Festival in January 2011. The atmosphere at the festival was electric and alive with literature, books, readers, writers, celebrities, wannabe celebrities and people who had a love for the written word (or wanted to be seen!). I was positively in awe of writers whom I had hear speak and with whom I got an opportunity to have a brief chat. It was after attending the festival that my (otherwise dormant) desire of writing seriously and being a "writer" really kicked in with renewed vigour .I have been writing for quite a while now, since I was in college; and not many people know that I had actually written my first full length novel at the age of twelve.But it was now that I felt the need to tell those stories to others- to be published and share those stories with a wider audience. Writing has been the only thing that ever made sense to me, the only way in which I can effortlessly express myself and that said I truly wanted to do something that I enjoyed from the bottom of my heart, something I felt passionate about and could put my heart and soul into. All this probably sounds cliche and fluffy, but one of the biggest reasons I wish to be a writer is because I have stories to tell! It's really as simple as that.

I got this opportunity a couple of months later in the form of a short story competition by publishing house Grey Oak Westland. I submitted two stories I had written and one of them got shot listed and has made its way into this wonderful collection of urban tales, called Urban Shots Crossroads.The stories in this collection, contributed by various authors, follow the lives of interesting people you'd come across in urban India, like the guy next door who you'd probably rub shoulders with on the bus to work.The book will be out on stands in mid to late January- launching in Mumbai, Pune, Bangalore, Hyderabad and Chennai, and I eagerly look forward to its launch and thoughts of readers once its out there.

The book is also available for pre order here. Stick around for more information on the book and more.
Posted by Maryann Taylor at 10:58 PM