I came across British Airways' latest commercial for the 2012 London Olympics on You Tube today and it brought back a flood of countless memories of days when I worked never ending night shifts with British Airways (BA) at Indira Gandhi International Airport in Delhi. Having been an international traveller from an early age I've always loved airports long before I began working at one. I love airports not only for the buzz and excitement of them, but also for how they never sleep, how alive they are at all times and of their promise of freedom and travel and journeys to far away places- places that you've only probably heard of, or seen as a tiny little dot on a map. But most of all I love how an airport unleashes you're imagination in a million ways, giving you the ability to dream and imagine and conjure up images of lands and people far away who may not look like us, but yet are so much like us.

As my first job it gave me great joy helping clueless passengers wandering around the airport, giving them directions with a smile on my face- no matter how sleep deprived I was, scanning bags, handing out boarding passes, getting my hands and clothes dirty overlooking bags being loaded into baggage containers-making sure each bag that went on that flight was accounted for, almost being frozen on the tarmac on cold winter nights making sure the baggage hold closed on time, handling flight delays and fog diversions, along with cranky and irritated passengers who had already lost their bags or were about to miss a connecting flight out of London, haggling with difficult and lecherous Immigration and Customs officials to get a piece of paper signed or stamped, and finally the joy of having "All on board" so we could finally close that aircraft door, get an on time departure and go get ourselves that much needed cup of coffee.

But despite all the hard work and broken backs the fact that I helped that flight land safely in London and the joy of knowing that I helped (even though in a tiny way) to get some one home, or send someone off happily on a long awaited vacation, or to that all important meeting or to their best friends wedding was unmatched and gave me a high nothing else could have. A heartfelt smile or a generous thank you and handshake (or even a hug in some cases) from a passenger was all it took to make all those long, tiring nights worth it- just knowing that you made someone's journey a little less stressful if nothing else by going out of you way for five minutes, or by just listening to what they had to say, was enough to make me feel proud of what I did for a living and being the face of an airline that people loved and trusted (not all the time, but then you can't keep everyone happy can you!)

For all the folks from BA who I've tagged (or forgotten to tag), all I want to say is thank you for your wonderful company on flights BA 142 and BA 256 from Delhi to London :)

I've also tried to add the link of the You Tube video I mentioned in the beginning of this post. Take a look-it's cute!

Posted by Maryann Taylor at 1:33 PM No comments:

Book Review: Scammed- Confessions of a Confused Accountant by Anonymous

Scammed- Confessions of a Confused Accountant written by an author who wishes to remain anonymous is an insightful story that gives readers a glimpse into the dark underbelly of the Indian corporate world, which often linked with corrupt politicians and power hungry individual’s results in an ugly and lethal combination indeed.

The book traces the story of Hitesh Shah, a young accountant who is stuck in a dead end job with a pushy boss who makes him feel incompetent and dissuaded. Hitesh’s moment of glory arrives when an impressed client offers him the role of the CEO of a company. Taken in by this lucrative proposal and the possible change of his fortune, Hitesh gladly accepts this new role. Though then, little does he realize the murky waters he’s about to enter given the scandalous history and political connections of the people involved in running this business.

Hitesh Shah is now the CEO of Super Cabs- a private company whose finances and fortunes he turns around. Super Cabs soon gains steady popularity and Hitesh is being interviews by TV channels and is in the news for the success and popularity of Super Cabs and becoming a youth icon and an inspiring young entrepreneur-Hitesh also begins dating a struggling yet attractive model Sushma, on whom he showers a lot of attention and expensive gifts. The owners of Super Cabs expect accelerated success and Hitesh gives into some questioning decisions made by the top management. Hitesh’s life appears perfect, when suddenly the labour union of Super Cabs stirs up trouble, giving rise to rumours of fraud- eventually opening a can of worms. Caught in the middle of this ugly controversy which soon turns political, Hitesh finds himself on the run.

This is when Hitesh’s middle class virtues of simplicity, ambition and appreciation of friendship and noble gestures comes to his rescue and help keep him sane through this rough phase. The ending of the book is interesting and keeps up the suspense considering that Hitesh is not completely innocent, since he overlooked many warning flags and questionable decisions made by the owners of Super Cabs. Eventually, it’s interesting to see how Hitesh gets out of this sticky situation.

What appealed to me about the book was its fast paced, gripping narrative. Though the author has spent time fleshing out the characters he wastes no time and keeps the plot moving at a gripping pace- which is what a book of this nature requires. Its uncomplicated prose and familiar corporate urban setting contributes to an engaging and light read, making for an excellent travel companion on a train or plane.


(This is a book review requested by the publisher)
Posted by Maryann Taylor at 12:10 PM No comments:

Do You Know How Beautiful a Winter's Day Can Be? 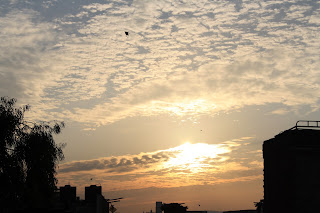 The sun gleams down the mountains,
Warm, liquid gold cascading along- bringing promises of comfort and cheer- moments savoured.

Silver clouds sail by so low, I want to reach out and touch them,
Radiant and aglow, bursting with sunlight- they teasingly graze the tops of hills as they lazily float across the sky.

I stand still, admiring with awe and baited breath,
So not to shatter this pristine stillness- feeling the the sun on my face and the breeze entwined in my hair.

Do you know how beautiful a winter's day can be?
Posted by Maryann Taylor at 8:08 PM No comments:

This is a long overdue post, I know and so tonight I just had to pull this post out of the draft folder that it's been sitting in for the past two weeks.The first thing that comes to my mind when I think of the Jaipur Lit Fest this year was how crowded it was! Readers, authors, celebrities and curious onlookers ambled through the Diggi Palace making it look and feel just like a "Mela", while adding to the crowd (and confusion).There was even a lost child announcement made on day three-yes that's how crowded it was! There were swarms of people just everywhere I went and thanks to Mr. Rushdie there was triple layer security and you couldn't get in unless you had a pass with a little bar code on it which contained "all your information" (creepy!). Thought the high society, dolled up, "book club aunties" on the hunt for authors who they could persuade to visit their clubs gave the festival a slight air of pretentiousness, yet nonetheless it was a wonderful experience and pushing through those crowds to get into talks was well worth it .

The beautiful sun washed Diggi Palace Hotel was the perfect venue and surprisingly managed to contain the thousands who attended. On Saturday, the second day of the festival it is believed that 17000 people attended and getting out of a talk venue was as challenging as getting into one and on Sunday they had to stop people for entering for a couple of hours! Luckily, there were days when I managed to get a seat in venues where there were a string of three talks that I was interested in attending and on some days I just sat outside in the sun near one of the speakers, sipping tea and eavesdropping on talks.

The one thing I thoroughly enjoyed was taking photographs with my brand new, beautiful Canon 1000D . It made my visit to the festival and Jaipur well worth it and I was that annoying little shutterbug who went click, click, click, onto anything that caught my fancy!

The above photograph was taken during a talk on Writers in Exile, in the most civilized (and by that I mean least crowded) venue the Baithak- which had the best seating in the festival thanks to the comfy Mudas and Gaddas. The talk had the fabulous Hanan Al Shaykh, Kamin Muhammadi and Fatima Bhutto talking about how living in exile effected them as people and writers.

My verdict of the Jaipur Lit Fest 2012- Crowded and controversial, yet completely worth it!

Posted by Maryann Taylor at 9:22 PM No comments: