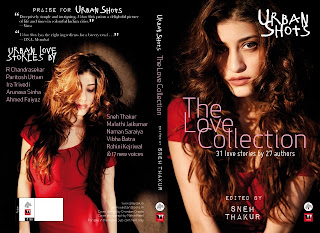 I’ll begin this book review with a confession that I don’t read love stories and I’m tremendously skeptical of the love story genre on the whole. Reason being that most of the few love stories I’ve read have been immensely cheesy and predictable and have more often than not, left me feeling nauseous and disappointed. Hence, I was pleasantly surprised when I began reading Urban Shots The Love Collection, edited by Sneh Thakur, since it was such a wonderful celebration of love in all it’s different hues and not just soppy, cheesy love but love ranging right from a youngster’s first crush, to heartbreak, to marriage and even translated regional literature.

What I enjoyed about this book was the fact that it followed the lives and emotions of ordinary people in urban India’s sprawling metropolises- people like you and me who you’d probably rub shoulders with on the bus to work, people who’ve experienced the dizziness of that first kiss, the impatient wait at the college café, late night text messages and hushed phone calls to the pain of heartbreak and rejection and everything else that involves that crazy little emotion called love.

With 31 stories contributed by 27 authors, Urban Shots The Love Collection is an interesting collection of love stories that traverse's the magnitude of love and will make you smile as you read on since there’s a lot you’ll be able to relate to- not because you’ve been in similar situations but because love is such a universal emotion and beautifully cuts across all barriers of location, culture, language and even gender!

There were a few stories in this collection that didn’t go down quite well with me, but that being said, most of the stories in this promising collection have stayed with me much after I’ve put the book down. One of the first few stories in the anthology was Rishta by Ahmed Faiyaz, which is the story of a young school teacher who’s trying to decide who would make a better life partner, a simple boy she’s known for a while or an older, unknown man in . Narendranath Mitra’s story Girlfriend, translated from the Bangla by Arunava Sinha, tells the story of a happily married man’s quiet rendezvous with his much younger girlfriend every evening after work, Ira Trivedi’s In Love With A Stranger talks about a bride’s conflicting emotions on her wedding day, Strangers, again by Ahmed Faiyaz is the story of a young guy who falls in love with his young and attractive neighbour only to find out that she had committed suicide a few months ago.

Gayatri Hingorani’s The Girl Who Was Too Loud is the story of a young couple who have a “loud” problem; where as A Simple Question by Naman Sariya tells the story of a writer who wants an answer to a simple question from his estranged girlfriend of many years. Lipi Mehta’s Twisted on the other hand tells us how love crosses all barriers, including even those of gender, while A Good Day by Richa. S. Chatterjee is the tale of a young married couple whose feelings for each other are rekindled after a rather devastating experience. Closure by Rashmi Gupta talks about how a young woman finally gets over and gets closure about her past failed relationship. Reality Bytes by Anitha Murthy is a virtual love story between a young girl and a mysterious stranger, Ayeesha Khanna’s A Girl Can Dream is the beautiful and innocent tale of childhood love, while Love is Blind by Vibha Batra is a story of how opposites attract while Invisible Touch by Jairaj Padmanabhan is the story how a young girl who falls in love with an intriguing boy she’s never met.

Urban Shots The Love Collection is a refreshing collection that makes for an enjoyable read, primarily because of an assortment of authors and the varied writers voices they lend the book. Pick up a copy if you’re looking for a light, yet enjoyable read- it won’t disappoint.


(This is a book review requested by the publisher)
Posted by Maryann Taylor at 9:01 PM No comments: 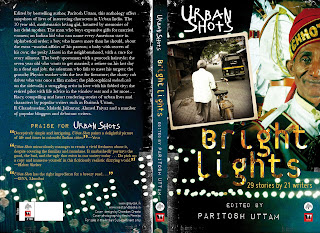 Urban Shots Bright Lights, a collection of 29 urban tales by 21 writers is a refreshing collection of short stories edited by Paritosh Uttam, author of Dreams in Prussian Blue and editor of the first Urban Shots collection. This colourful anthology contains stories contributed to by various authors and captures the numerous hues of life in modern urban , alive with a cacophony of sounds, kaleidoscopic colours, dizzying heights, blinding lights and a fast paced life. What I particularly enjoyed about this collection is how most of the stories touch upon interesting, quirky and at times eccentric characters one comes across in an urban environment.  Urban Shots Bright Lights contains stories contributed by established authors such as, Paritosh Uttam, Ahmed Faiyaz, R. Chandrasekar and Malathi Jaikumar, as well as many first time authors and bloggers. The lovely thing about this book is how most of these tales are about people in urban , who have stories that surprise or inspire or just leave you with a smile on your face.

Urban Shots Bright Lights brings to you some heart warming, pensive and humorous stories of ordinary folks with some extraordinary lives and experiences; such as the ten year old mathematics loving young girl plagued with memories of her dead mother in Arvind Chandrasekar’s story “Amul”, Ahmed Faiyaz’s heartfelt story “Across the Seas” talks of a mother’s longing for her son who lives abroad, “Alabama to Wyoming” by Paritosh Uttam is the story of a young boy who knows the names of all American states in alphabetic order, while “Good Morning Nikhil” by Ahmed Faiyaz is the tale of a little baby who secretly meets his dead grandparents, “Maami Menance” by Pradeep. D. Raj is a humorous account of an annoying neighbour who drops by uninvited; R. Chandrasekar’s “The Peacock Cut” is the story of a popular international basketball player sporting a unique peacock haircut, Roshan Radhakrishna’s story “Father Of My Son” is an amusing account of a father confronting his seven year old son who wishes to get married to his classmate.

Other stories I enjoyed were, “Jo Dikhta Hai Woh Bikta Hai” by Sneh Thakur which is a delightful tale of how a young management trainee sneakily meets his sales targets, while “The Pig In The Poke” by Mydhili Varma is a an entertaining story of a young school boy’s detailed correspondence with a Nigerian scammer, “Hot Masala” by Jhangir Kerawala is the story of an unemployed man craving that extra spice in his life, while Arefa Tehsin’s story “Hot Pants” is the  adventure of a hot pants clad young girl making her way back home late at night on a local train, while being followed by a stranger.

The wonderful thing about Urban Shots Bright Lights is the interesting array of tales it contains, which gives the reader a colourful account of lives and people in urban and the experiences and challenges that are part of their lives. Brimming with an engaging array of brilliant tales, this book is a treasure trove for the short story lover and for anyone who enjoys reading about life in ’s vivid, vibrant and dazzling cities.

(This is a book review requested by the publisher)