Lookie, I got a Tattoo! 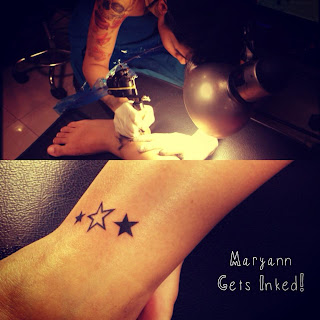 This year on my 29th birthday I got myself a tattoo. A real tattoo which is going to be on my skin for the rest of my life, unlike those temporary ones you get yourself when you go to .

I was desperately trying to ignore my birthday this year, which is strange because I’m usually the kind who loves making a big deal about it every year.  I guess it was something to do with the fact that I was right at the edge of my second decade and was experiencing a strange dread and emptiness. I guess it may have something to do with how “turning thirty” is always made out to be such a big deal and the fact that you usually question yourself on what you’ve “achieved” so far. But since I still have a year to go before entering my third decade I have decided to accelerate my ambitions, before I hit the big thirty without any answers and a similar emptiness. People make New Year resolutions, I make birthday resolutions. And like New Year resolutions, they barely last beyond the first week. But this time, I tell myself, it’s going to be different.

I have always wanted a real tattoo, but for some reason the desire never materialised. But like most things I’ve always wanted, I spend a few hours doing solid research and then I go out and get it (the same applies for when I bought my DSLR and Kindle).  I spoke to a colleague who has a tattoo (which looked very sharp and well done) and he directed me to Devilz Tattoos in GK M block market. To be surer, I asked people on my Twitter and was again directed to Devilz. Now the thing is that I am petrified of needles, I am notorious for avoiding blood tests as much as I can just so I can avoid needles, but since I wanted a tattoo so bad, I tried to ignore the fact that there were needles involved. Research done, I went to GK on Monday and after having made sure that the tattoo artists at Devilz use fresh needles and good quality ink, I paid an advance and booked an appointment for Wednesday evening.

A little bit about the price. Devilz charge 2K for the first square inch and then seven hundred and fifty for the next square inch. My tattoo was 2.5 square inches and including an after care balm I bought from them, my tattoo cost me a total of 3.6K.

I had a design in mind, I wanted stars on my foot, but when I shared my idea with Shyamli (who is one of the few female tattoo artists in India and who is excellent) she told me that the skin on the foot is very thin as compared to other parts of the body and my tattoo would fade within a few months. She suggested the ankle and so the ankle it was. And since I practically live in dresses and skirts in the summer, the ankle is a nice place to show off my tattoo.

How much did it hurt? Much less than you’d imagine. It feels like an ant biting into your skin, which is tolerable and which means that I was not howling in pain. Something I had anticipated, considering I have a zero threshold for pain. No, seriously I am TERRIBLE! Shyamli chatted with me for a bit and made sure I was comfortable, which really helped take my mind of the fact that there was a needle (with a constant metallic buzzing sound) piercing through my dermis and epidermis (I clearly did a LOT of research).

Forty five minutes later the tattoo was done and it looked perfect. My tattoo was covered with cling wrap and I was given a little piece of paper with after care instructions. Shyamli went over all the after care with me once again and sent me away with a little tin of balm, which I was supposed to apply on my tattoo after two days.

The actual process of getting a tattoo isn't a big deal, it's the after care of a new tattoo which involves quite a bit of work. I’m supposed to keep it covered, wash it with water (no soap) three to four times a day, pat it dry with a soft cloth and apply a thin layer of the tattoo balm I've been given. The skin over my tattoo’s going to dry and begin flaking off after a few days and I have been told NOT TO peel off the scab, or it will ruin the tattoo. This is going to be difficult, considering how much I love pulling off scab from my skin.  I've read many different versions of tattoo after care, some suggest applying Vaseline, but my aftercare list has a big, red cross on an image of Vaseline, so I guess I’ll stay away from that.

It is day’s four of my tattoo and it feels a bit sore, especially when my clothes rub against it and when I apply the balm, but it’s still not half as bad as I imagined. I guess it’s your imagination which tricks you into believing that it’s going to be absolutely agonizing, but in reality it hurts much, much less. So that’s my little tattoo story; I have stars on my ankle and I love them.

Posted by Maryann Taylor at 1:09 PM