From The Garden to the Gaon

For anyone who has bothered to read or subscribe to this blog will realise that I have been away for quite a few months. I have been lazy I’ll agree, but I've also had reasons for this long-ish absence.

A lot has happened in these four months that I’m happy about; I've changed jobs and have moved houses (twice in six months actually). After having lived with the in-laws for three years, the husband and I decided that it was time for us to stretch our wings and move out. It worried us that as adults we had no idea how to run a home.

But more than anything else, I was desperately in need of my own space and my own independence. As an only child I crave solitude and silence and love being left alone. This is something the husband has come to understand and respect, but this silence and solitude I longed for was hard to find in a house constantly buzzing with people.

A lot of married people I know talk about how convenient and comfortable it is to live with ones in-laws. Everything’s taken care of and you don’t really need to bother with the actual running of the household. There’s nothing wrong with living with your in-laws if that’s a choice you've made and are comfortable with, but personally, I love my independence and would never compromise on that for a bit of extra comfort. The control freak that I am I constantly need to be in charge of how my house is run; from the groceries that are bought, to what’s cooked for dinner, to the way I like having my house cleaned. Comfort in the form of cooks and cleaners can be hired, so that’s not really an excuse of still living with one’s parents (unless you really, really want to). The fact that I can wake up in the morning and decide that I’m having eggs for breakfast is so liberating that I’m taking my time to savour my new found independence.

From Rajouri Garden to Gurgaon and I can feel the difference already (the difference between the two is a story for another day). I was skeptical about moving out of “Delhi”, but it was for good reason I told myself, I’ll be much closer to work and I could hop across to Delhi any time I liked, I mean it’s only an hours drive away really.

Gurgaon has it’s problems I agree, the city has it’s share of crime, there’s limited electricity (the entire city is running on generators) and water is scarce, but what I love about Gurgaon is that it’s an ambitious city, it’s a growing city (most of the city’s growing vertically, but still) and it’s a city I can work in, meet friends in, go shopping in and feel comfortable in.

Now coming to the house- it’s a small-ish two bedroom flat, with a tiny balcony (where we hope to do barbecues soon), large windows and lots of natural light (at least until we get curtains). It’s lovely, my little flat is and I absolutely love it. We moved in here a few days before Christmas and the first thing I did was put up my Christmas tree and string it with lights and only then did I truly feel like I was home. 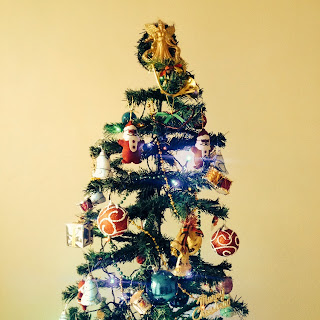 Being on the sixth floor of a secure, gated community means that it’s really, really quiet (this is something I love, though the husband doesn't quite) and you don’t have to deal with random strangers ringing your door bell. When we decided we wanted to live in a flat, the husband and I made sure we wanted to live in a community which feels cheerful, positive and safe and is well lit after dark and I can now safely say that with this flat in this particular society we got exactly what we wanted.

Since this is the first time we've moved out by ourselves in India, we didn't have any furniture and so for now it’s just beanbags and a few random chairs strewn around the living room, a makeshift bed on the bedroom floor and a few mismatched cups. But this lack of possessions is liberating in many ways. Having decided not to hoard, we’re careful about what we buy. Each time we pick something off a store shelf, we ask ourselves, do we really need this, or do we just like the look of it? Making a home out of a house takes time and I’m looking forward to it. It’s like a little project the husband and I are working on together, something we enjoy and something we look forward to. 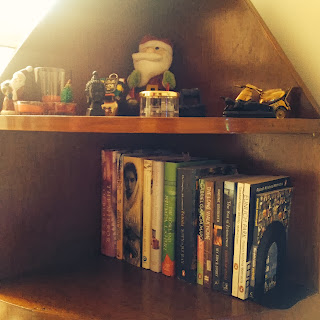 It's been two weeks in our new house and I feel at home already. It's peaceful here and I can read, write, potter round the house and just be myself. I've discovered little corners of the house where I hole up when I want alone time. A few lone moments to think, to reflect, or to just sit all by myself without the pressure of having to make conversation with anyone. I am a solitary person and this house let's me be who I am and I like that.

I've also managed to get myself a rather cheerful Bengali cook *touch wood, touch wood* who makes some of the most divine fish curry I've eaten in the longest time that I'm in food coma most days after dinner. I've also stocked my fridge with lots of fresh veggies, but for now it's the fish which is winning! 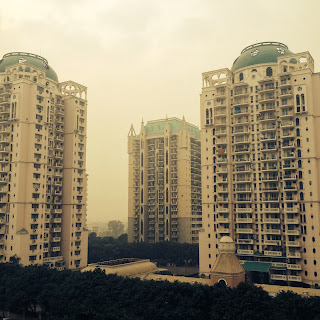 When I look out of my window I see concrete towers looming out in the distance, but for some reason this doesn't disturb me as much as I imagined it would. A concrete jungle some may call it, I on the other hand see an ambitious and flamboyant city, a city I may never call home, but then again never say never right?
Posted by Maryann Taylor at 8:31 AM